From 11th to 19th January, the St. Moritz Gourmet Festival 2019 will guarantee an explosion of culinary delights in the Upper Engadine, to be ensured, together with the Executive Chefs from the festival partner hotels, by nine top-class chefs from Europe and Asia. Advance sales of event tickets has started. 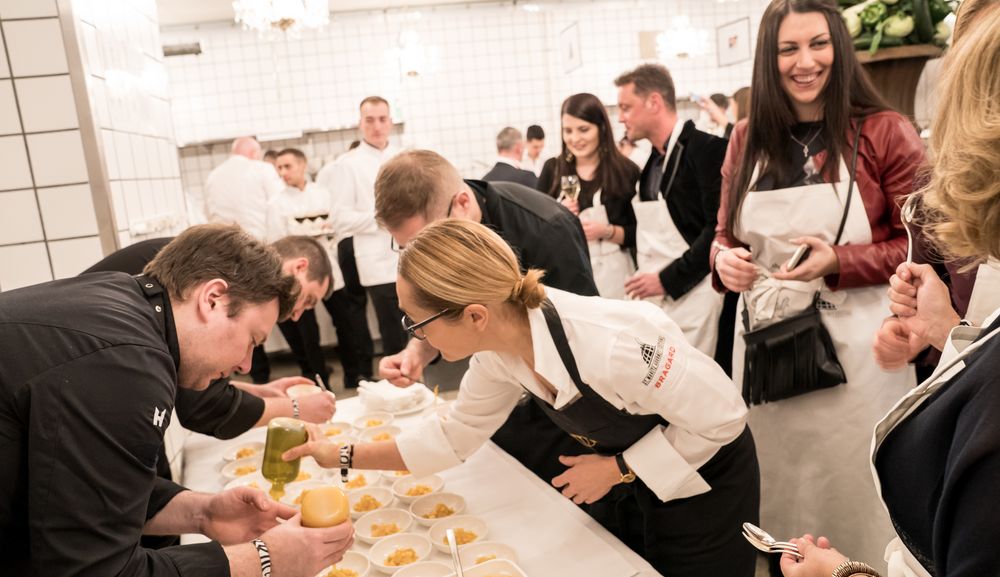 The festival programme will be as varied as the high-ranking cooking skills on display from the international guest and local chefs. The event kicks off on Friday evening (11th January) with the glamorous Grand Julius Baer Opening at the Kulm Hotel St. Moritz. It will be followed by six evenings of Gourmet Dîners and the extremely popular Gourmet Safaris. On Tuesday evening (15th January), the Kitchen Party will be held as the summit meeting including all the star chefs at the Badrutt’s Palace Hotel, and on Saturday evening (19th January) the Great BMW Gourmet Finale will be the crowning conclusion of the festival in the prestigious setting of Suvretta House.


Admission tickets for the event are available on line – early booking is recommended
Advance sales of event tickets has started. Tickets are available on the web site www.stmoritz-gourmetfestival.ch - except for the Gourmet Dîners and selected special events, which can be reserved by contacting the respective partner hotel directly.

The guest chefs in the overview
From Friday through Tuesday, 11th to 15th January 2019, the one and only Sergio Herman from the Netherlands will settle in as guest chef of Executive Chef Dirk Haltenhof at the Badrutt’s Palace Hotel. It is well known that Sergio Herman was awarded the fabulous highest possible rating of 20 GaultMillau points at his former Oud Sluis restaurant, as well as three Michelin stars and a long-term top position in the "World’s Best Restaurants" ranking.

Graziano Caccioppoli, newly appointed Executive Chef at the Carlton Hotel St. Moritz, is looking forward to having an adventurous grand chef from France at his side in the shape of two-star chef Philippe Mille from the Le Parc restaurant at the grand hotel Domaine Les Crayères in Reims - famous for refined plays with textures and delicately created nuances of flavour.

Executive Chef Fabrizio Zanetti at the Suvretta House will also welcome a native Frenchman namely two-star chef Guillaume Galliot, albeit from Asia: at the Caprice Restaurant at the Four Seasons Hotel in Hong Kong, Guillaume Galliot is famous for polishing his dishes for years, until the aromas of France unite in perfect harmony with "the tastes of the world".

At the Hotel Nira Alpina in Silvaplana-Surlej, recently appointed Executive Chef Dariusz Durdyn, will be host to one of India’s best known chefs, with whom he will surely conjure up exotic delicacies: Star chef Manish Mehrotra from the Indian Accent restaurant in New-Delhi.

At the Kulm Country Club, GaultMillau’s "Newcomer of the year 2018", Sven Wassmer from the Grand Hotel Quellenhof in Bad Ragaz, will be a guest of Executive Chef Mauro Taufer at the Kulm Hotel St. Moritz, and create a sensation with his cosmopolitan alpine avant-garde cuisine.

From Tuesday through Saturday, 15th to 19th January 2019, acclaimed exceptional chef of New Nordic Cuisine, Nicolai Nørregaard from the Kadeau restaurant in Copenhagen, will enter the domain of Executive Chef Fabrizio Piantanida at the Grand Hotel Kronenhof in Pontresina.

Awarded the title "Best German chef abroad 2018" by GaultMillau, the top chefs Thomas and Mathias Sühring will be the highly enthralling guest chef duo hosted by Executive Chef Gero Porstein, who has been head of the kitchen team at Hotel Waldhaus Sils since the summer.

South Korean Mingoo Kang will also have a long journey to participate in the St. Moritz cult festival, where he will be the guest chef of Executive Chef Matthias Schmidberger at the Kempinski Grand Hotel des Bains.