Official Watch of St. Moritz, the Swiss watchmaking company presents its chronograph keeping time to one hundredth of a second to add to its Conquest collection: the «Conquest 1/100th St. Moritz». This special edition, created in the context of the partnership between Longines and St. Moritz houses a unique movement using the latest-generation technologies. 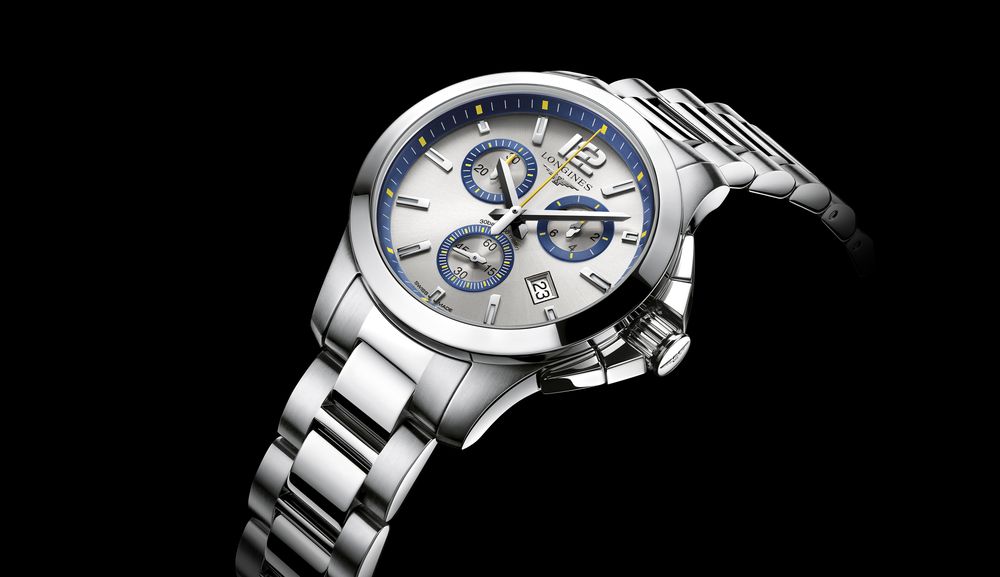 Longines, timekeeper for sporting performances since 1878, launched in 2015 a new line of watches that have been specially created for sports which require high precision timing. The Conquest 1/100th series responds to the needs of athletes, professionals and sports fans, besides many others, since it measures multiple intermediary times and has an intuitive analogue display that shows the time to one hundredth of a second using a separate hand. All of this is possible thanks to a latest generation movement.

Longines is now the Official Watch of St. Moritz, which is renowned worldwide as the epitome of elegance, a value dear to the Swiss watch brand. The spectacular ski resort hosts FIS Ski World Cup stages all timed by Longines. It is also avenue for stylish equestrian events, such as the Longines CSI St. Moritz or the White Turf St. Moritz and its Longines Show-Sprint Race. To celebrate this partnership, the winged hourglass brand is launching an exclusive edition created especially for St. Moritz: the Conquest 1/100th St. Moritz. Touches of yellow and blue on the hands, the dial or the flange subtly hint at the iconic logo of St. Moritz, which is also engraved on the case back.

The demands required for Longines to reach such an extreme level of precision have led to the development of a new quartz movement, the L440, developed exclusively for Longines by the manufacture ETA. This new model includes a microcontroller with a flash memory that allows the watch to be reset instantly and allows intermediary times to be recorded. With a diameter of 41 mm, this steel model has a silver face that displays hours, minutes, small seconds at 6 o'clock, the date and other chronographic functions: a central seconds hand, a 30-minute stopwatch at 2 o'clock and a 12-hour stopwatch at 10 o'clock. The hand in yellow displays time to one hundredth of a second and is the watch's crowning glory at the centre. The model is also fitted with a steel bracelet and a butterfly clasp.